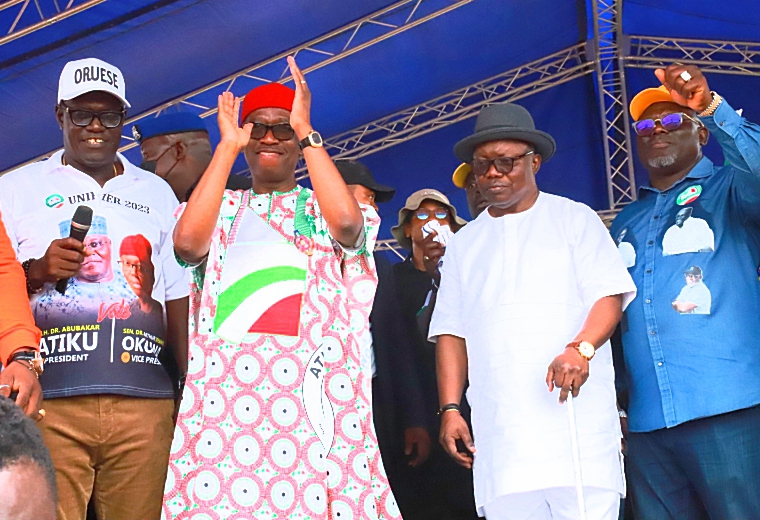 Led by Olorogun Kingsley Esiso, a barrister-at-law, the state’s PDP chairman and Director of Campaigns, Rt. Hon. Funkekeme Solomon, the campaign had among top personalities, the State Governor, and PDP Vice Presidential candidate, Senator (Dr. Ifeanyi Okowa, squeezing out time from the national Campaigns with his principal and Presidential candidate, Atiku Abubakar to be on the train.

Immediate past Governor of the State, Dr. Emmanuel Ewetan Uduaghan and Delta South Campaign leader, confirmed that Patani Local Government Area and Isoko North Local Government Areas are made up of PDP loyalists who will cast their votes for all the candidates of PDP all the way.

Uduaghan who was heralded onto the well built and sturdy Campaign podiums by the Buga dance music at both campaign turfs, and first at the Opukabu Primary School Ii, on Ogeelware Street, Patani paid glowing tributes to the PDP leader in the area, and former State chairman of the party, Captain Pius Sinebe who was unavoidably absent saying that Sinebe had shown great loyalty to the party in building and sustaining the PDP growth in the local government.

At both events, Uduaghan told the people why voting for all the candidates of PDP in the 2023 elections is crucial. He said first, Delta State was fortunate to have a Deltan, a smart Deltan, Governor Ifeanyi Okowa emerging as vice Presidential candidate of PDP.

He said the situation alone makes it imperative that every party faithful must work hard for all PDP candidates beginning with the Atiku-Okowa Presidential ticket, through to the governorship ticket of Sheriff Oborevwori – Monday Onyeme, the Senate ticket of Hon. Michael Diden, Nicholas Mutu for the House of Representatives for the Patani-Bomadi Federal constituency, Pastor (Engr) Jonathan Ukodhiko ( House of Representatives, Isoko Federal constituency) and the House of Assembly candidates for Patani, Emmanuel Sinebe and the Isoko North candidate Bernard Odior.

Uduaghan said election of all PDP candidates was crucial for synergy of operation because “We have somebody from Delta as vice Presidential candidate of PDP in the person of Governor Ifeanyi Okowa.”

He said: “We must acknowledge that it’s the hand of providence that has done this for us in Delta, that one of us, a Deltan has been chosen to be vice Presidential candidate of PDP. That is why we must all vote for PDP and Atiku and Okowa will be our smart vice president.”

He then urged the people to look out for the space in the ballot papers with an umbrella and thumb print on it as that is the symbol of PDP as they will not see the faces of the candidates on the ballot papers.

The State Party chairman, Olorogun Kingsley Esiso at each visit introduced each of the party’s candidates and handed over flags to them. He then received Mr. Kalofari Origin, Candidate of PRP, who dumped his party for PDP with a pledge to work for the success of PDP candidates in the 2023 elections.

Oborevwori, the governorship candidate told the people that he is an ardent student of the political school of “our sabi governor” His Excellency, Senator (Dr) Ifeanyi Okowa. ” He is educated and learned and I have learnt a lot of good things from him about being detribalised and not being sectional,” he said.

He continued: “My social contract with Delta people is M.O.R.E. From the Okowa school that I attended, I have said that I will do more. Okowa is pan-Delta, and I am pan-Delta. I am one with excessive local content I am Street wise..

Esiso who urged the people to take back their destiny by voting out APC from the Federal Government for PDP announced that January 24, 2023 is PDP Day in Delta State, the Day the PDP