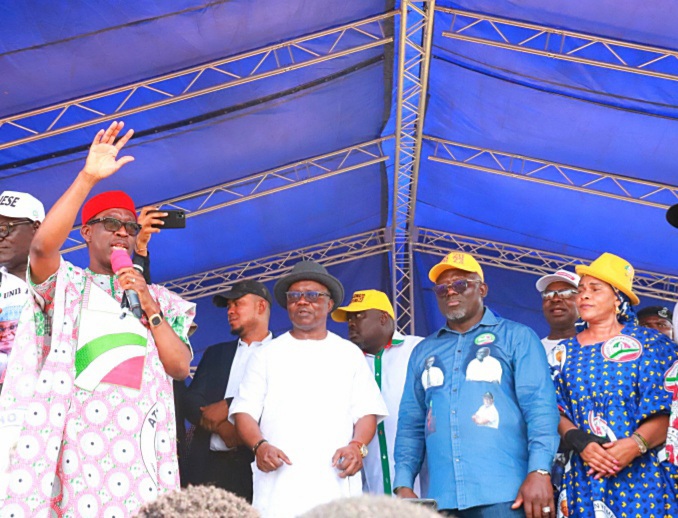 He said that those retrogressive elements, including unemployment, had remained the lot of Nigerians since the inception of APC government.

Okowa spoke at the flag-off of Delta Governorship campaign in Patani and Ozorro, and stated that the Atiku-Okowa ticket of the PDP would repair all the damages  in its “Recover Nigeria” mission.

He urged Nigerians to reject the APC and return the PDP to power in the 2023 general elections to enable it to rebuild the country.

“My dear people of Patani, I thank you all for your support for the PDP over the years.

“As a party we have done well for our state and country but it’s unfortunate that the APC came in 2015 and destroyed all the achievements we recorded.

“And, because they are ashamed of their performance in the last seven and half years, they have resorted to lies and propaganda.

“They have nothing more to offer than inflicting poverty, hunger, insecurity and a collapsed economy to Nigerians,” he said.

The vice-presidential candidate urged the people to be hopeful and return PDP to the presidency, saying “please vote all our party candidates because PDP will win the elections.

“I have been going round the country and I can assure you that PDP will win the 2023 Presidential Election.

“Atiku and I will repair the damages caused by the APC; everything PDP did before they came, they crashed all and they still have the effrontery to be campaigning.

“The PDP government will ensure that our universities would no longer go on strike and we will continue all our youth and women empowerment programmes”.

On the governorship election, he called on the people to vote Sheriff Oborevwori to ensure continuity in the development of the state.

He commended former Governor Emmanuel Uduaghan for his efforts at reconciling party members across the state.

“I have worked very hard for this state and many more work still need to be done. So what remains to be done Sheriff Oborevwori will continue from where we will stop.

“Let’s work hard to win all votes in Delta so that we can achieve our rescue mission mandate,” Okowa added.

Addressing the crowd, the former Governor, Emmanuel Uduaghan, charged the people to vote all PDP candidates, adding that, “for the first time we have somebody from our dear state nominated as vice-presidential candidate.

“So we must work hard to ensure that the PDP wins the Presidential election because if PDP wins, Okowa will take some people with him to Abuja and many of our federal roads will be attended to.”

The Governorship Candidate of the party, Rt. Hon. Sheriff Oborevwori, thanked party faithful for choosing him to fly the party’s flag.

He said that he had learnt a lot from Okowa, and assured that he would do M.O.R.E. for Deltans if elected.

“I have learnt a lot from Governor Okowa and I am very happy that through your votes and by the grace of God, he will become our next vice president.

“Okowa has achieved a lot in the last seven and half years, but I will achieve more for Deltans if you elect me,” he stated.

State Chairman of the Party, Chief Kingsley Esiso, appealed to the people to remain committed to the PDP’s rescue mission by voting for the Atiku-Okowa ticket.

While saying that Deltans were happy with the Atiku-Okowa ticket,  Esiso urged the electorate in the area to deliver all candidates of the party in the general elections.

Director-General of the State Campaign Council, Chief Funkekeme Solomon, called on the people to collect their Permanent Voter Card (PVC) to enable them to vote for all candidates of the party.

Highpoint of the rally was the presentation of flags to candidates of the party and reception of Peoples Redemption Party (PRP) candidate for Patani Constituency in the State House of Assembly, Mr Tarelayefa Orogun, who said that he decided to forego his mandate to support PDP.