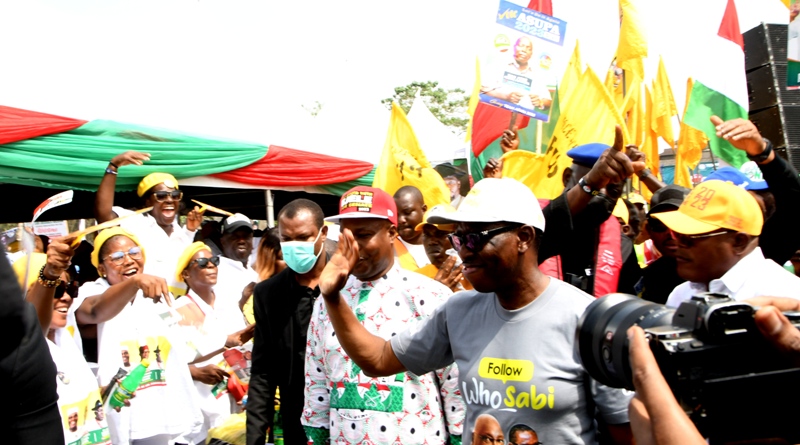 Delta Governor, and Vice Presidential Candidate of PDP, senator (Dr) Ifeanyi Okowa, overwhelmed by the joyous welcome accorded the campaign team, expressed gratitude to the people for the continued support given to the PDP and the state government, and announced that the Ayakoromo bridge contract has been retrieved from the former contractor who failed to perform and re-awarded to SETRACO.

He said: “”My dear people of Burutu Local Government Area, I thank you for all your support for our party candidates over the years.

“We have also reciprocated your support by constructing concrete pavement of all internal roads in Burutu town; another 20.29-kilometre Obotobo 1– Obotobo 11– Sokebolou–Yokri road in Ogulagha Kingdom.

“We constructed modern market and built schools in Burutu Town, Ogulagha and other communities but unfortunately there is one project that you people are not happy about which is the Ayakoromo bridge.

“The contractor has not been doing well and we have recently terminated the contract and re-awarded it to SETRACO Nigeria Ltd.

“Next week, we will mobilise them to start and they will finish it because it is a promise I made to you people and I must fulfill it.”

Governor Okowa urged the people to remain committed to the Atiku-Okowa ticket, and assured them that PDP would win the presidency and rescue Nigerians from the hardship caused by the inept APC-led administration.

“Our party has recognised one of your own,  my humble self as Vice-Presidential candidate and by the grace of God the Atiku-Okowa ticket will win the election in 2023.

“I appeal to you all to give us your support to enable us turn out more votes for our party; we have done well campaigning in 15 states so far and we are very sure of victory for the party,” he assured.

Deputy Governor of the state, Mr Kingsley Otuaro, while addressing the people said that the impressive turn-out of supporters was an indication that Burutu over time had been a PDP local government area.

He said the Okowa’s administration had done quite a lot for Burutu town in terms of road construction and charged the people to vote all PDP candidates in the general elections.

The Governorship Candidate of the party, Chief Sheriff Oborevwori, commended the Ijaw people for adopting candidates of the PDP for the 2023 general elections.

He affirmed that Okowa’s administration had provided a lot of infrastructure for Burutu LGA, with over 30-kilometre roads constructed and over 44 schools renovated and constructed.

Oborevwori, who was flanked by his running mate, Chief Monday Onyeme, assured that he would deploy his MORE Agenda for the advancement of the state.

State Chairman of the party, Chief Kingsley Esiso, said Deltans were happy that the state would for the first time, produce a Vice-President of the Federal Republic of Nigeria and urged the people to work hard towards realisation of the Atiku-Okowa presidency.

Director-General of the State Campaign Council, Chief Funkekeme Solomon lauded the Governor for terminating the Ayakoromo bridge project and re-awarding it to a more competent contractor and for transferring the State School of Marine Technology from Ministry of Transport to Higher Education for effective management.

Funkekeme said that riverine communities in the state believe that an Atiku-Okowa Presidency would be very beneficial to them hence they have decided to throw their weight behind them.

Leaders of the party who spoke at the rally include Peter Biakpara; former Governorship aspirant Chief Braduce Angozi; among others.