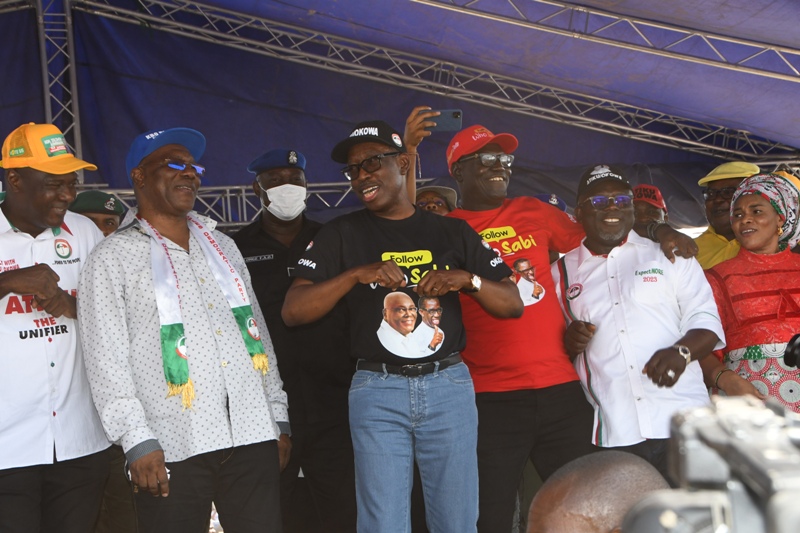 The equally massively thronged Oleh Stadium in Isoko South Local Government had inscriptions on the customised party attire worn by some supporters beckoning with the message: “Come, let’s Rescue and Rebuild Nigeria.”

These were the operational messages that leaders and chieftains who spoke at various times underscored when the campaign train of Delta Peoples Democratic Party, PDP, Campaign Council hit Ughelli North and Isoko South Local Government Areas Wednesday in their messages of support and assurance to vote for the party’s candidates to underscore their commitment to PDP declared mission to “Reset, Rescue and Rebuild” the Nigerian nation.

Notable PDP chieftain, Chief Fred Majemite, hinted of a change in the narrative of the politics of Ughelli North. He said: “All those who left PDP have returned to the party, and Ughelli North is now united behind PDP. We are breaking the jinx.”

Hon. Festus Agas, who is also the Chief of Staff, Government House, aligned himself with the sayings of Chief Majemite, and told the campaign train to be rest assured that they have decided to change the political narrative in Ughelli North. “In the next election, Ughelli North will deliver PDP six-over-six,” Agas assured.

Mr. George Oyefia from Orogun said the 2023 elections provides the people of Ughelli North the opportunity to reciprocate the good gesture done to the people of the Local Government in providing infrastructural development to the people, the many appointments for its members, human capital development, empowerment of widows and skill acquisition programmes for the youths. He said: “Because of what the PDP has done for the people, we are going to deliver six-over-six.”

A member of the All Progressives Congress (APC), Hon. Charles Oniyere, who is a member of the Delta State house of Assembly, dumped the APC and its broom for PDP. And acknowledged the Delta PDP Governorship candidate, Rt. Hon. Sheriff Oborevwori is a servant-leader and pledged to work for his election and the election of other candidates in 2023.

Director of Campaigns, Rt. Hon. Funkekeme Solomon while thanking the people for their massive turnout at the campaign rally urged them to ensure that they put their thumbprint in the space with the umbrella picture on the ballot papers.

PDP State Chairman, Barr. Kingsley Esiso, touched by the multitudes at the rally, said the impressive turnout showed that the people of Ughelli North were tired of the APC-led Federal Government. “That government has brought hardship to Nigerians, making them buy a bag of rice for N55,000.

Receiving another APC decampee to PDP Esiso said: “There are persons who have been in darkness and have seen the light. They have been carrying brooms about like witches.” He then received Chief Esiobe and his followers, who dumped the broom to take on the umbrella.

Yet another APC member who openly dumped the party at the rally for the PDP revealed that he was originally a member of the PDP before leaving for APC. The man whose name was not immediately available said: “I have gone to the wilderness where there’s no water. You will agree that things are not moving well with Nigeria, businesses in Nigeria have shut down. The prodigal son is back to PDP where I belong and PDP will win Ughelli North six-over-six.”

As if reiterating what Obaro said, the former Chief Whip of the Senate, Senator (Mrs) Stella Omu in his speech said: “PDP has tested and trusted persons with integrity to rescue us from the pain we are suffering in Nigeria. The Atiku-Okowa show cases tested persons, which also demonstrate sensitivity to the religious sensibilities of Nigerians.”