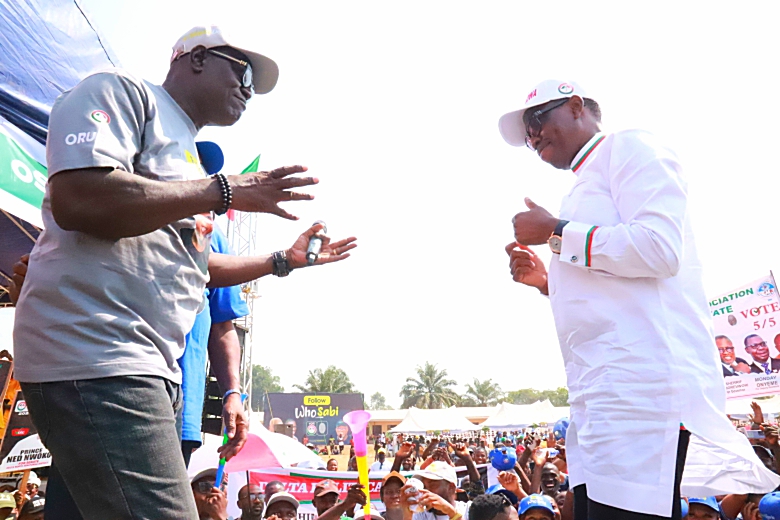 All Progressives Congress (APC) Federal Government and its Presidential Candidate, Asiwaju Bola Tinubu represent sorrow in Nigeria and must be rejected at the 2023 elections.

This was the contention of faithful and supporters of the Peoples Democratic Party (PDP) at the Campaign rally Thursday, December 29, 2022 when the campaign train came to Oshimili North and Oshimili South Local Government Areas of Delta State on.

State Party Chairman, Barr. Kingsley Esiso, while speaking about the deeds of the APC-led Federal Government that disqualified the party and its Presidential candidate from continuing in Government because of the hardship the administration has afflicted the country with, Esiso urged the massive crowd to reject APC’s Presidential candidate, saying a sick country that needs to be rescued, reset and rebuilt cannot be ruled by a sick President.

The voice actually meant to say that voting for Bola Tinubu would mean a continuation of sorrow for Nigeria and so, must be rejected, while Atiku Abubakar of PDP should be voted for rightly, to reset and rebuild Nigeria as President.

Telling the people that he was happy to be with them at the rally because of the quality of leaders present and because the presence of the mammoth crowd convinced him that the people of Oshimili North and Oshimili South Local Government Areas have rejected APC in totality and ready to deliver all PDP candidates during the elections.

“APC has finished Nigeria; spoilt our economy; people can’t travel on the roads because of the bad state of the roads; and people can’t go to the farms because of insecurity created by people carrying guns, kidnapping and raping women. The end of the APC Federal Government has come.

“Having destroyed our economy, security in the country, they are bringing to us a sick person. Can a sick man govern a sick country?”

Esiso continued: “There’s also a new madness in town called Labour Party (LP), with Mr. Peter Obi as Presidential candidate. When Obi came to my office, I asked him to show me one landmark project he did as Governor of Anambra State. He said he left so much money in the bank. I told him when people cannot pay children’s school fees, or access good health facilities, and you said you left money in the bank. I said, ‘you are a wicked man’. Of what use is money in the bank when those you should spend the money on are suffering?’ I told him to go and see the Obi (Prof.) Chike Edozien Secretariat in Asaba.”

The Labour Party does not have what it takes to be in Government in Nigeria, Esiso said.

Pointing out that APC will never happen to Nigeria again, Esiso said PDP is on a rescue and reset mission for Nigeria for the improvement of our economy battered by the APC-led Federal Government. “Can you imagine that in Nigeria today, we buy rice for N55,000.”

He called on the people to vote for Atiku Abubakar on whose Presidential ticket, Governor Ifeanyi Okowa is running as Vice-President, pointing out that Okowa will work with Atiku to restore Nigeria back to safety and security.

Meanwhile, PDP leaders in the Local Government Areas visited gave a rousing welcome to the PDP campaign train that included the Vice-Presidential candidate of the party and Governor of Delta State, Senator, Dr. Ifeanyi Okowa, Oshimili North PDP Chairman, Chief Nduka Ogude assured that there’s no other political party in the Local Government except PDP, and that “we are fully set for the 2023 elections.

Secretary to the State Government (SSG), Chief Patrick Ukah said: “We assure you of one thing: Oshimili North is a moving train and moving with PDP. We have no worry about winning the elections; our worry is the magnitude of votes to be delivered for all PDP candidates.”

Hon. (Mrs) Pat Ajudua, representing Oshimili North in the House of Assembly, welcomed the campaign train, saying that come 2023, Okowa will be Vice-President working with Atiku.

Director of Campaigns, Rt. Hon. Funkekeme Solomon thanked the people for their massive turnout with a call on them to translate the mass turnout into tangible votes for all PDP candidates to win.

Oshimili South PDP Chairman, Ogbueshi Dada Okonji thanked Governor Okowa for all the landmark projects executed in Asaba, which have transformed Asaba in a very unique way, especially the flyover at Koka.

Chief Edwin Uzor on his part said it was a moment of joy for him to welcome the campaign train to Oshimili South, and declared that “It is a settled issue that Governor Okowa has done very well in Delta State, especially Oshimili South Local Government. He called on the party faithful to be calm and to join hands together to vote all PDP candidates five-over-five.

Chieftain of the party in the Local Government, Ogbueshi Ejiofor Onyia assured that Oshimili South will give PDP maximum votes, pointing out that “we are 100 percent PDP. Onyia called on all to ensure that they have their PVCs to vote PDP all the way.

Highlight of the rally was that Mr. John Azuka, who leads some APC members, dumped the party and was received into PDP by the State Chairman, Olorogun Kingsley Esiso.

Another highlight was that PDP supporters were happy, bright, and pleasant at the Arcade venue of the Local Government campaign rally, Asaba.