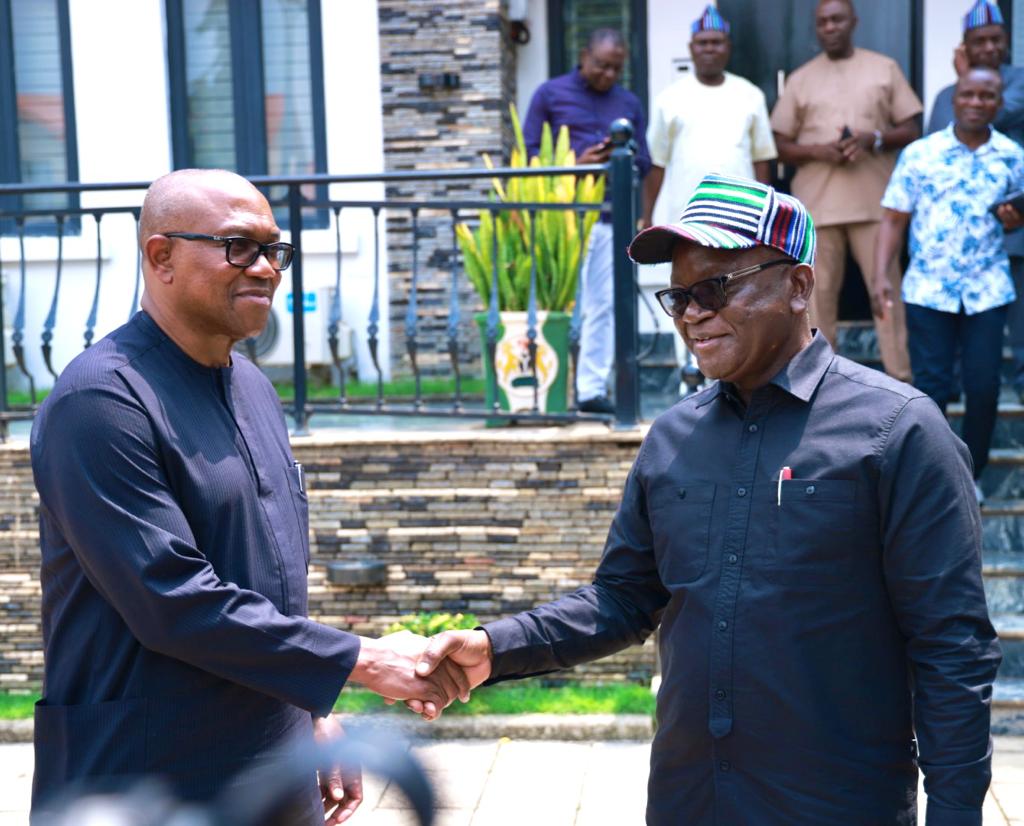 Barely 54 days to the 2023 General Election – the most crucial time for candidates to crave for endorsements – two candidates in the February 25 presidential election anxiously await the adoption of their tickets by five estranged governors of the Peoples Democratic Party.

Who, between the candidates of the All Progressives Congress, Bola Ahmed Tinubu, and the Labour Party, Peter Obi, will secure approval of the “Integrity Group” of five PDP governors (PDP-G5) for the February 25 poll?

The governors of Abia, Benue, Enugu, Oyo and Rivers states were in a rendezvous in London in the past week, to reportedly finalise their months-long consultations with candidates of the APC and LP.

Governors Okezie Ikpeazu (Abia), Samuel Ortom (Benue), Ifeanyi Ugwuanyi (Enugu), Seyi Makinde (Oyo) and Nyesom Wike (Rivers) have offered themselves to the highest bidder since the May 2022 presidential primaries won by former Vice President Atiku Abubakar. Led by Wike, who came second at the primaries – and was sidestepped by Atiku to pick Delta State Governor, Ifeanyi Okowa, as running mate – the governors have asked for resignation of PDP’s National Chairman Iyorcha Ayu for a Southern replacement. As Ayu failed to resign due partly to the tacit backing of the PDP leadership, the governors have foreclosed a truce with the party, and support for the Atiku-Okowa ticket.

Going by media reports, the governors need to approve a candidate that has the capacity to defeat Atiku at the poll. And having considered Tinubu and Obi as viable candidates, who will the governors pick between the two?

On paper – owing to APC’s structures as the ruling party, and Tinubu’s political bridges built over the years across Nigeria – the former Lagos State governor stands a better chance to tackle Atiku at the poll.

And coupled with his war chest, the governors are likely to endorse Tinubu, to overwhelm Atiku, and vindicate their split with the PDP leadership.

But there’s a comma: The APC Muslim-Muslim ticket that’s become an albatross around the necks of Tinubu and his running mate, former Borno Governor Kashim Shettima.

Notably, the five governors’ states of Abia, Benue, Enugu, Oyo and Rivers are predominantly Christians, whose leaders oppose the APC same-faith ticket. So, what role will religion play in their choice of who to adopt?

Meanwhile, Obi, more than any other candidate, has courted the PDP-G5 to adopt him and his running mate, former Senator Yusuf Datti Baba-Ahmed, for the February election. Since defecting from the PDP to LP in May 2022, Obi hasn’t relented, as his new platform mostly exists in the register of the Independent National Electoral Commission.

Many polity watchers and supporters of the APC and PDP didn’t give Obi any breathing space, deriding him for running under a party that lacked the structures to compete at the poll.

But Obi and his supporters in the “ObIdients Movement” argued that their structures were the voters that would birth Obi’s touted New Nigeria.

Thus, the supporters have seized the media space, hit the towns and cities with “million-man” on the go, and crowded Obi-Datti’s rallies everywhere.

Despite the momentum – and several alleged controversial opinion polls indicating Obi’s leading the pack – the Obi-Datti ticket knows nothing is “a done deal” in the world of politics.

Obi’s soliciting the PDP-5G adoption received some sort of approval a few weeks ago when Wike promised to provide him with “logistics support” whenever he’s in Rivers to campaign.

When Obi rallied in Port Harcourt, Wike provided him with armoured trucks and security personnel, for his movements and to protect the venue.

But the big break for the Obi-Datti campaign came on Christmas Day in Benue, when Governor Ortom urged Nigerians to vote the LP ticket.

It wasn’t the first time Ortom would plead Obi’s cause, but the “Christmas gift” was unambiguous – showing a possible direction Ortom’s colleagues could cast their lot for Obi or Tinubu.

Obi’s in Makurdi, the Benue capital city, to celebrate Christmas with Internally Displaced Persons (IDPs) – victims of mostly herdsmen’s attacks, and recent flooding across Nigeria. It’s on the back of spending time with the IDPs that Ortom unpacked the political goodies for Obi, who donated N3 million for the members’ upkeep. Commending Obi for visiting the IDPs on Christmas Day, Ortom described him as the best person to deliver Nigeria from its challenges.

Ortom’s words: “Several presidential candidates have come here, and none of them has chosen to visit those IDPs’ camps and look at their plight to see how they are doing and give them hope that when they win, they will bring them succour, help, and hope.

“For you (Obi) to have chosen to visit the IDPs on a Christmas Day that you should be celebrating with your family, for me as a Christian, I say God will bless you and your aspiration.

“My prayer is that God will bless your aspiration to be the president of this country. Because I have seen capacity, faith, and hope. And I have seen someone who can bring the required equity, justice, and fairness that I have been pursuing since I became governor in 2015.

“If I were not in PDP, I would have been following you all over the place, to canvass and vote for you. But because I’m in PDP, I’m telling Nigerians that this man (Obi) can help deliver this country from its challenges.”

What better Christmas “gift” does Obi need than Ortom’s full-throated endorsement and canvassing for votes of Nigerians for him to be president! The odds seem to favour Obi in the PDP-G5 camp. But the game isn’t in the bag yet, as he needs the backing of Ortom’s four colleagues – Ikpeazu, Ugwuanyi, Makinde and Wike – to wrap things up.

Will Obi fully or partly secure their support or lose entirely the quartet’s adoption to Tinubu for 2023? It’s a matter of days for the coast to clear!