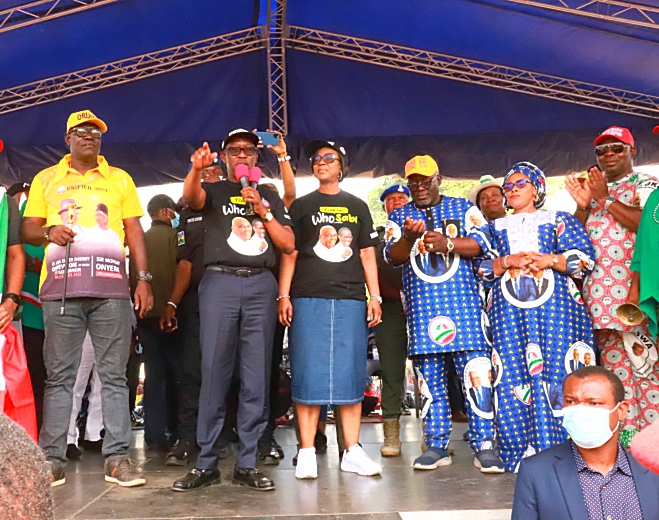 The All Progressives Congress (APC) has been described as a party characterized by gloom and the absence of light that leaves its faithful in darkness. “There’s no candle in APC, there’s no match stick in APC,” the decampee said.

This was the submission of Mr. Bolum Michael Okwuchi aka Political, who dumped the APC in Aniocha North Local Government Area of Delta Tuesday, January 03, 2023 for the Peoples Democratic Party (PDP) when the PDP Local Government Campaign train visited Issele-Uku for the campaign rally.

Okwuchi told the campaign train which included the PDP Vice Presidential Candidate and Governor of Delta, Senator (Dr.) Ifeanyi Okowa that he has decided to return to PDP, and asked the Governor and party leaders in the local government to forgive him for going to APC where darkness lives.

He said: “I may have betrayed you, please forgive me. Your Excellency, I know that I have disappointed you. I just want to show you the men and women that are coming back to PDP with me. Your Excellency, I want to tell you just as the chairman has said, there’s no candle in APC, there’s no match stick in APC; it’s all darkness. Now we have returned to light. So, I want to thank everybody that has welcomed us. I greet you all in Jesus name, Amen.”

Meanwhile, the Delta Governorship Candidate of PDP, Rt. Hon. Sheriff Oborevwori has assured the people of Aniocha Nation (Delta North) that he would not engage in treachery against Anioma nation but that he would always stand by them.

Speaking at the carnival like campaign rally in Ogwashi-Uku, Aniocha South,  Oborevwori said: “I want to tell you something, I have worked with our Governor; Senator (Dr) Ifeanyi Okowa has good eyes and for him to choose me as the Delta State PDP Governorship Candidate, he knows I have undergone the processes, i have graduated from his school, I have the experience and want to assure you that there will be Meaningful Development, Opportunity for All, Realistic Reform and Enhanced Peace and Security.

“I am a unifier, a Pan-Deltan, I will listen to you people MORE, do MORE and achieve MORE. The government that is coming is going to be all inclusive. I will continue from where the Governor will stop, I will not abandon any Projects.

In another development, PDP leaders in Aniocha North and Aniocha South Local Government Areas all announced their support for PDP and that all the party’s candidates will be voted for five-over-five, all the way.

Aniocha South PDP Chairman, Prince Mike Okwufulueze told the campaign train and the mammoth crowd: “We are here at Aniocha South Local Government, the land of love and land of victory.

“That you started the year 2023 with the Aniocha South rally shows that victory is assured for PDP. We assure you that Aniocha South has no opposition; we shall vote massively for PDP, Okwufulueze said, and congratulated PDP in advance for victory.

Also, notable chieftain of PDP in the local government area, Chief A.C. Okocha called PDP Vice Presidential Candidate, Senator Dr Ifeanyi Okowa as a gift to Nigeria, and assured that the people of the local government vote for only PDP candidates all the way, for five-over-five.

Even as the Director of Campaigns, Rt. Hon. Funkekeme Solomon thanked the people for the mass turn out to welcome the campaign train, urged them to translate the mass outing to massive votes for PDP, State chairman of the Party, Olorogun Kingsley Esiso, never again will the good people of Aniocha South allow APC to enter Aso Rock again. He then introduced the candidates for the elections in the local government.

They include, Dr. Isaac Anwuzia, House of Assembly candidate; Hon. Ndudi Elumelu for House of Representatives, and Prince Ned Nwoko for Senate.

“It is necessary for us to thank you for the infrastructure development in our local government, empowerment programmes for the people, widows empowerment, skill acquisition training for the youth; how do we repay you? There shall be massive votes for all PDP candidates,” Dame Okwuofu said.