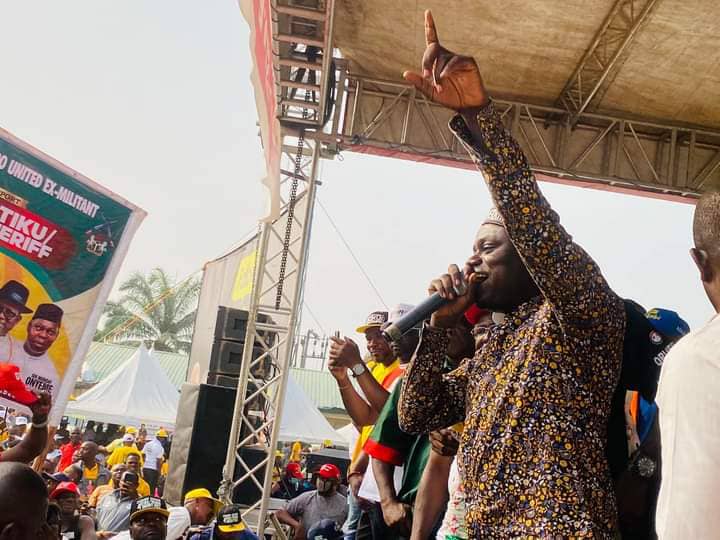 Campaign rallies of the Peoples Democratic Party (PDP) in Udu and Warri South-West Local Government Areas of Delta State Wednesday further exposed people’s strong disapproval and dislike for the All Progressives Congress (APC) lacklustre rule by the Federal Government and the party’s horrible handling of members. Eventually, the incidents were what campaigned for the campaign train; the campaign committee had nothing much to say as the campaign was as good as done. They left fulfilled that a good mission had been accomplished.

At the two rallies that were held at separate times, in both Local Government Areas, people’s revulsion and dislike of APC’s performance since it started ruling as Nigeria’s Federal Government were conveyed in music lyrics played by musicians and by former members of APC who revealed their thoughts and disgust for the party by announcing that they were finished with the APC and so dumped it and embraced the PDP. Present at the rally were PDP’s Vice-Presidential Candidate and Governor of Delta, Senator, Dr. Ifeanyi Okowa, immediate past Governor, Dr. Emmanuel Uduaghan among many other PDP leaders, and chieftains.

At the Warri South-West Local Government rally, the musicians sang: “Na so so hardship APC de bring, we go pursue them o; PDP don come back.

Changing to another tune, the musicians sang, saying: “How many people like the price of rice now? What about the price of fuel? Una fit de pass Federal Roads? APC give chance o, Nigerians de provoke o.

“PDP don come o, everybody follow who knows road o.” The musicians sang and produced sounds that got the PDP supporters into heavy dancing and chanting of praise for the PDP, Atiku-Okowa Presidential ticket, Sherif Oborevwori-Monday Onyeme Governorship candidature, and all the other candidates of the party.

But it was at the Udu Local Government Area rally subsequently that erstwhile faithful of APC actually applied the pin on the APC balloon, bursting and shattering it in the process, announcing that they have dumped the APC and come out openly to embrace the light, PDP.

Taking turns to declare their exit from the APC, Mr. Aghogho said: “My Udu people, just a short one; go home tell your brother, tell your sister, tell mama, tell your daddy and tell your leaders that it is all over. Go tell them to come and join PDP.”

Former APC Youth Leader, Mr. Austin Boguwe said: “I Austin Boguwe is decamping from APC to PDP. They should take their broom, we don’t need it, we need the umbrella.”

Former APC Chairman Udu Ward 7, Mr. Benjamin Shata said: “As a former member of APC, we know what we can do. I am standing here on behalf of myself, and the APC family in Udu Local Government. Today, we say no; the time has come for us to move forward.

“I have come today with five Ward Chairmen, six Ward Youth Leaders, and eight Local Government EXCO members, including Ward EXCO members that are numerous here. In fact, I am telling you that there is no more APC in Udu.

He continued: “Again, we have three Legislative Aides; there are former legislative aides, and they are also here. Also, we have 14 former Ambassadors of the APC who are here in our midst.”

Shata gave reasons why they had to dump the APC for the PDP, saying: “The reason why we took the bull by the horns to leave APC is because we want to progress. When you are in a boat for donkey years, and you check your life, you are not moving forward, my friend you have to check very well.

“Also, I saw some of my friends; they are doing well on this side. I never knew it was that sweet. All APC members that have decamped today, I tell you that you have come to the light.

“The reason why we are decamping is because we cannot continue to work with a dictator. No man is an island. Someone once asked me if it is my family members that are the ones doing me that I am not progressing. I said now, I want to break that chain that has held me down. I have seen light and I have come to identify with the light.

“And just as I am standing here, I have been Atikulated; I have been Sheriffied. In fact, Jite is our next House of Assembly member. The more reason why I took the bull by the horns to dump the APC is because people that I have played politics with in this Local Government in 2011, which we’ve been winning, they’ve all moved to PDP, and I am still in opposition. They have all seen the light.

“The likes of my Chairman here, we worked together in 2011, and in 2015 when he moved, his life changed for the better. I said ‘no, no no no, my own life must change for the better also.’ That’s why I told my people it is time for us to move; I have seen the light, and now we have come; you will see the light. PDP! Power to the people!” Mr. Shata greeted other PDP faithful and rested his story.

The State PDP Chairman, Olorogun Kingsley Esiso while receiving the decampees, welcome them to the PDP assuring them that in PDP there is no newcomer, no new joinder, adding that they are now bonafide members of the PDP and that they are entitled to all privileges that members of the party enjoy.