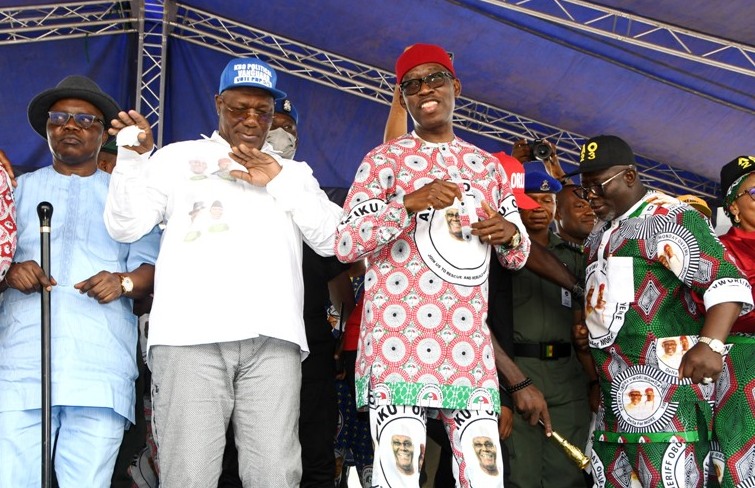 The nature of using the broom as a symbol for a political party like the All Progressives Congress (APC) has been described as carrying the evil seductive charm of a bewitching influence. It will, therefore, be a misfortune for the country to continue to have such a party as ruling the good people of Nigeria.

This was the obvious reading and interpretation given to the statement of Delta State Chairman of the Peoples Democratic Party (PDP), Olorogun, Barr. Kingsley Esiso, Thursday at Otu Jeremi, the capital of Ughelli South Local Government Area during the party’s campaign rally that held at the expansive premises of Ughievwen Primary School.

At the event attended by PDP Vice-Presidential candidate of PDP and Governor of Delta State, Senator, Dr. Ifeanyi Okowa, and a host of other party leaders, faithful and supporters, the party also made a big catch of former APC loyalists who dumped the party for the PDP, led by Barr. Martin Umukoro, the Senior Legislative Aide to the Deputy Senate President, Senator Ovie Omo-Agege.

Esiso, while describing the huge turnout of PDP faithful, supporters, and decampees from APC as a clear statement that the people of the Local Government are tired of APC and have rejected the party, said: “Your Excellency, this is not a rally; this is a celebration of PDP victory in Ughelli South. We must be happy because what we are seeing here today is an indication that the good people of Ughelli South are tired; very tired of the mismanagement of this country by the APC-led Federal Government.”

He continued: “I have been informed, Your Excellency, that in this arena, we have some of our brothers and sisters who were in darkness yesterday, who before yesterday have been parading the streets of Ughelli South in clear afternoon with brooms like witches and wizards. Today, they have decided to drop the broom and carry the royal umbrella.

Welcoming Barrister Umukoro into the PDP fold, Esiso beckoned on him to greet the massive gathering and Governor Okowa.

Umukoro denounced the APC as a wicked political party that could not in eight years remove fuel subsidy but now want to remove it for an incoming Government in six months, adding that the APC has degenerated into a party of “family affair.”

Find below the recorded speech of Barrister Umukoro at the Otu-Jeremi PDP Local Government barnstorm.

“Your Excellency, Senator, Dr. Ifeanyi Okowa, the Governor of Delta State, and by the grace of God, the incoming Vice-President of the Federal Republic of Nigeria, When I told my people that I was coming to join the PDP they told me I could not because I have spent too many years in the APC. I told them that I will do so; they said ‘you cannot.’ Somebody told me that you cannot resign from a level 16 job to a zero level. I said PDP is really the upper level.

“So, today, I say I have gone to the APC at the National level, at the South-South zonal level, at the State level and today, until three days ago, I was the Senior Legislative aide to the Deputy Senate President. And I have advised him in every capacity about light but they persist in remaining in darkness.

“I made my choice to walk away from a party that is fast becoming a family affair into a populist party that I will always go for. Quote me that I said from the National level, if in eight years you could not remove fuel subsidy, you want to remove it for an incoming Government in six months is that not wickedness?

“I know that it requires a man, a clever man, a manager of people and resources to come and reset this country. And I know that the Governor of this State (Delta), who has governed a multi-capital State, a State with equivalent capitals in every zone, so you’ll have to reproduce development projects in all the zones, Dr. Ifeanyi Okowa. We cannot take only Asaba, we will take Ughelli, we will take Sapele.

“So, on behalf of the many many decampees, 140 persons of my personal supporters, and the other SLAs who have followed me, I pledge and wish to say that in all capacities, we will put our experience, our skills, and our capacity to the greatness of this party so that in this election that will be unit based, we will be able to say that we came to the right place.

‘Thank you, Your Excellency.”

A similar campaign rally was held in Ethiope West Local Government Area at the Oghara Township Stadium where party leaders in the Local Government assured the campaign train of unflinching support for the PDP and will vote for all the party’s candidates.

Ethiope West PDP Chairman, Chief Solomon Obaremi while welcoming the campaign train to what he called “the root of the PDP in Delta” said: “Ethiope West has not failed PDP since inception. We do not have another language but PDP. We in Ethiope West will give you victory. Welcome to Oghara, the home of victory.”

Chief John Nani, another PDP chieftain, while praying that God would clear the enemy away before the election said: “In Oghara, we have remained the same party. Since 1999, PDP has never lost any election and we shall replicate this at the elections again this year. Ethiope West is PDP and PDP is Ethiope West.”