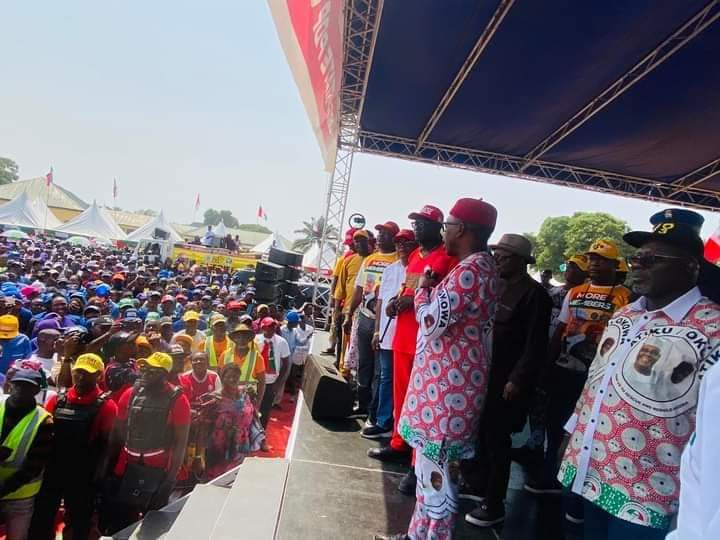 The crusade at the campaign rallies themed to end bad governance that has continued to weaken Nigerians and Nigeria persisted on Tuesday with Peoples Democratic Party (PDP) in Delta State making progress by winning more converts from the opposition into its fold to strengthen its arsenal in the battle to return to power to reset and rebuild the country.

While the PDP State Chairman, Olorogun Kingsley Esiso appreciated the huge turnout of people at the rallies in Obiaruku, Ukwuani Local Government Area and Isiokolo in Ethiope East Local Government Area, saying that it showed that people were tired and practically ready to chase out APC from Aso Rock seat of the Federal Government, it was Governor Ifeanyi Okowa, the Vice-Presidential Candidate of the party that went on a humour hurl, while greeting Delta Central Senatorial Candidate, Chief Ighoyota Amori, saying in pidgin English: “Dem no go thief your vote again o, in Jesus name.

The PDP Vice-Presidential Candidate seemed to agree with the observation of Esiso about the massive turnout of people at the rallies, acknowledging at Isiokolo again that indeed there’s a difference in the people’s turnout from what it used to be. Governor Okowa said: “There’s a difference today. It’s like you people have decided to use your PVCs to pepper APC at the elections,” pointing out that the APC government has done many bad things that now have detrimental effects on the country. “Even the unity of Nigeria they have scuttled,” Okowa lamented.

He urged the people not to despair but vote for the Atiku-Okowa Presidential ticket and all other PDP candidates into office so as to end the syndrome of bad governance of the APC Federal Government.

Meanwhile, the netting in of people who dumped their former political parties again took place at the two campaign rallies of the party held at separate times at Obiaruku, for the Ukwuani Local Government Campaign rally, and at Isiokolo for the Ethiope East Local Government Area rally.

At both rallies, no fewer than eight persons led their supporters to dump their parties for the PDP. They included three leaders and their groups from Ukwuani LGA, namely, Mr. Gabby Kester of Ward 9 and his followers, Mr. Lucky Anigala, Christian Eziuwe, from Umukwata, all of them former members of APC and Mr. Ebuwa Ifeanyi, a former Senatorial aspirant of the Labour Party (LP).

Announcing his decision to dump the APC for PDP, Mr. Gabby Kester said: “We have suffered enough, and we see that a lot of people have overtaken us. And because of time, let me quickly say that enough of using the broom to cover ourselves, because when the rain will fall it will destroy all our clothes. We want to use our PDP umbrella so that when rain falls the umbrella will shade us.”

While Mr. Ebuwa Ifeanyi lamented being cheated out of the Senatorial primary election of the Labour Party which he said he won, and had been the moving spirit behind the party, he said he had to dump the party and will now convert everything being used previously to promote that party for the PDP for the election of the candidates of PDP.

At the Isiokolo PDP rally, while some decampees from APC spoke in vernacular, others spoke English. Mr. Frank Oboro said: “I have decided to join the PDP because APC has brought hardship to this country.”

Mr. Patrick Efe Ogheneroro (Paleke) said: “I was once lost but I am now back home. All glory to God and to Hilary Ibegbulem, my oga and my friend for my return home.”

Mr. Alex imara said: “I am glad to be home; home sweet home. I had strayed away erroneously. I had gone and I have seen what is there, and I know of a truth there’s nothing like home. And I have come back home. In error, I ran for the Local Government Chairmanship with the wrong party. But now, I can see to the glory of God that this is my real home.”

PDP State Chairman, Olorogun Kingsley Esiso, while receiving them into the party called on them to work assiduously for the success of all PDP candidates at the coming elections to enthrone PDP all the way. “Drop the broom and pick up the royal umbrella,” Esiso said.

“Because today in Nigeria, we can no longer go to the market to buy goods; the prices of goods and services have gone very high beyond the reach of the common man. We are now aware that the price of rice has moved from N8,000 to N50,000 today. We are now aware that our mothers can no longer go to the farms because we now have kidnappers, rapists, murderers as introduced by the APC-led Federal Government in Nigeria. We cannot continue like this, APC Must Go!”

Earlier, and on each occasion at both rallies, the Director of Campaigns, Rt. Hon. Funkekeme Solomon thanked the people for coming out en masse to receive the campaign train. At Ukwuani LGA rally, he urged them to understand that since 1999 PDP has been winning, pointing out that no one changes a winning team. “Continue to vote for all PDP candidates in all the elections.”

At Isiokolo, the Ethiope East LGA rally, Solomon thanked the people for the turn out and said: “PDP has come because PDP is your party.

“APC deceived Nigerians in the past. PDP now needs to come in to reset and rebuild this country. This is why I appeal to you to vote for the Atiku-Okowa ticket for President and Vice-President and all other candidates of PDP into office.”