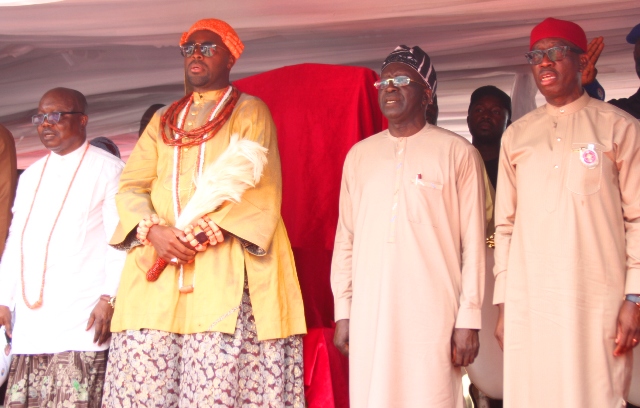 The Delta State Oil Producing & Development Commission, DESOPADEC, has been commended for its impact in enhancing greater exchange and unity among communities through the provision of connecting infrastructure and shared amenities for the development of the people.

The commendation came from the National Chairman of the Peoples Democratic Party, Sen Iyorchia Ayu, and the Executive Governor of Delta State and Vice President of the party, Sen Dr Ifeanyi Okowa, and the Olu of Warri, His Royal Majesty, Atuwatse III. 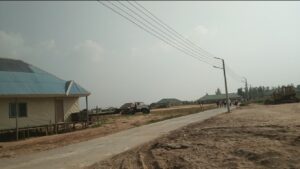 They made the commendation on Wednesday at the commissioning of the three kilometre concrete road linking Oboghoro to Ogheye Dimigun and a pedestrian steel bridge across the Jorojoro Creek also connecting Ogheye Dimigun with Oboghoro and Utonlila communities in Warri North.

“This bridge symbolises the unity that we deserve in this country,” Ayu declared while cutting the tape in company with Gov Okowa, Dr Emmanuel Uduaghan, immediate past Governor of Delta State and His Royal Majesty, Ogiame Atuwatse III.

“If we link communities by infrastructure and development, there will be greater interaction and understanding,” he enthused.

Speaking at the occasion, Gov Okowa said he was impressed and very satisfied with the efforts and commitment of DESOPADEC in the provision of infrastructure for the people and communities of the oil producing areas, describing it’s achievements as wonderful.

He informed that besides the pedestrian bridge across the Jorojoro Creek, DESOPADEC has achieved giant strides in building two new towns, complete with housing estates, primary and full boarding secondary school, cottage hospital, internal roads, rural electrification, water scheme and civic centre for the communities of Oboghoro and Utonlila which have also been connected with another bridge to foster communication and interaction among the communities in the Delta axis of the Benin River. 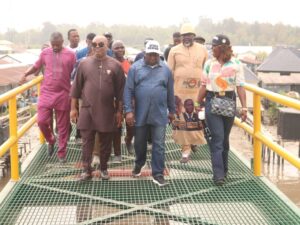 While presenting the projects for commissioning, the Managing Director and Chief Executive Officer of DESOPADEC, Bashorun Askia Ogieh, explained that “before now crossing the Jorojoro Creek was by wooden boats which are sometimes pulled by hand.”

“This we seek to eliminate by the construction of the bridge. It is safer and faster now for our people to move across.

“The concrete road has been constructed to allow vehicular movement around the Oboghoro urban community. More critical was the need to find a lasting solution to casualties regularly recorded in travels by river between Oboghoro and Ogheye, particularly by students.”

Earlier in the day, Sen Ayu and Gov Okowa commissioned the sprawling Ogheye Ultra Modern Floating Market, described as a wonder in the rivers, to enhance commerce among the Delta communities along the Benin River and their coastal neighbours from Ondo, Edo, Ogun and Lagos States.