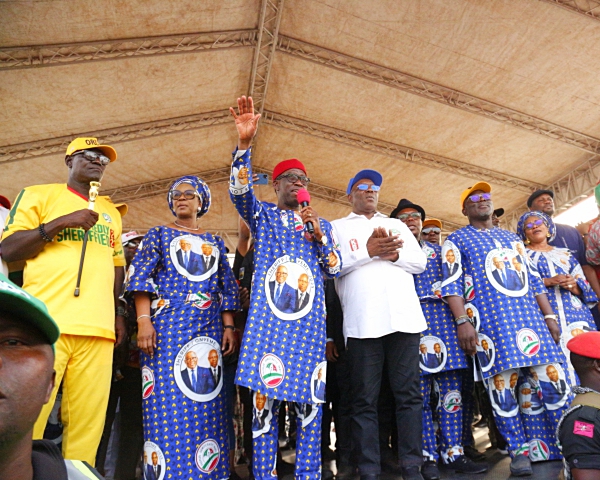 Political leaders in Okpe Kingdom, Thursday were united in expressing profound gratitude to the Vice-Presidential candidate of the Peoples Democratic Party (PDP) and Governor of Delta State, Senator, Dr. Ifeanyi Okowa, the Delta State PDP family and Deltans for believing and trusting the people of the Kingdom with the making of their son Rt. Hon. Sheriff Francis Oborevwori to emerge as the Governorship candidate of the PDP in Delta State.

Their show of gratitude and thankfulness is like being in consonance with the writing of Camara Laye, who wrote in his classic novel, “The African Child”, saying somewhere in the book that “A thankless child is worse than the bite of a snake.” But the Okpe people showed Thursday that they are thankful.

The emotion-laden speeches, delivered both in Okpe vernacular and English language were made when the Delta State PDP Local Government Campaign train arrived at Orerokpe, Headquarters of Okpe Local Government Area to a razzmatazz of diverse displays of welcome.

Foremost PDP leader and former Minister of Information and erudite political scientist, Prof. Sam Oyovbaire while welcoming the train assured that the people of the Local Government will deliver 100% votes to all PDP candidates. He said: “We are with Atiku and Okowa, Sheriff Oborevwori is our son, Ighoyota Amori is our son, We shall Vote for Hon. Evelyn Oboro for the House of Representatives and Augoye for the House of Assembly. It shall be five-over-five for PDP.”

Okpe LGA PDP Chairman, Ugo said: “We are very very grateful to welcome you all to Orerokpe, the ancestral home of the Okpe people. We say thank you to your Excellency, we are very grateful.” He then pledged that the only way to reciprocate the good gesture to Okpe is that all Okpe people will vote for all PDP candidates as they have always done.

For High Chief Onome, the Okpes are ready to vote maximally for Atiku-Okowa, Sheriff Oborevwori, the Ukodo of Okpe, and all PDP candidates. “Where there’s a majority there you join,” he said with a call on Okpe people to understand that “this is our chance.”

Hon. Igwebi said: “Dr. Ifeanyi Okowa, we thank him for making today the greatest day in the history of the Okpe people. APC – All Progressives Congress is not on the ballot here. No normal person will vote for the APC because the economy of the nation has collapsed. It’s Atiku for President, Okowa for Vice-President. The entire Okpe people will vote for PDP candidates five-over-five.”

Hon. Anthony Efe Afe said: “Your Excellency, Senator, Dr. Ifeanyi Okowa, We have come to appreciate you, and it’s only God that will promote you for what you have done for the Okpe people; even our grandchildren will be grateful to you.

“Your Excellency, there’s no fear in Okpe Kingdom; be rest assured that Okpe will declare 100% for PDP all-the-way,” Efe Afe said, pointing out that the PDP has no opposition in Okpe Kingdom.

Mr. Napoleon Gbinijie said: “I stand as a guarantor to Okpe people that all that you have done for Okpe, that you will reap it. That we thank God that one of us from Okpe will be Governor of Delta State, and God has also done it that a Deltan will be the Vice-President of this country.”

The Director, PDP campaign Council in Delta State, Rt. Hon. Funkekeme Solomon thanked the Okpe people for the massive turnout to welcome the campaign train. He urged the people to understand that APC has been described as an Association of Poverty Creators, saying: “That is why Nigeria is in this sorry state. But PDP is set to reset this country. And Atiku is set to rescue the country as incoming President. This is why you must all vote PDP all-the-way.”

State PDP Chairman, Olorogun Kingsley Esiso commended the people of Okpe, saying in pidgin English: “I greet the people of Okpe Local Government because dem know wetin de.” He told them how hard the work had been to get to this stage where Okpe is celebrating. The Governor said, “It must be Sheriff Oborevwori.”