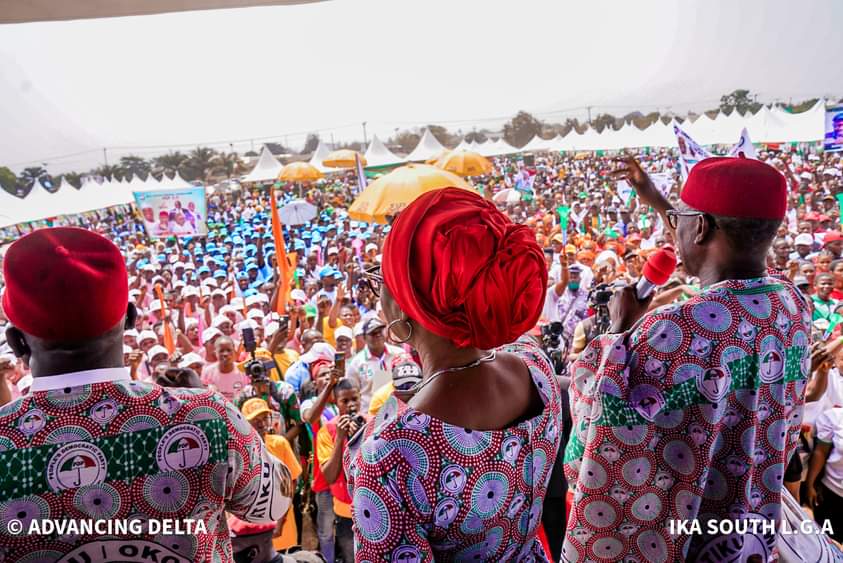 An unprecedented crowd of supporters, leaders, and members of the Peoples Democratic Party (PDP) Friday attended the party’s campaigns at Ika South and Ika North East Local Government Areas, with joy, ecstasy written all over.

The venues were the Open Field at Agbor in Ika South Local Government Area and the expansive field of the famous and prestigious Ika Grammar School, Boji-Boji, Owa.

The people danced to music from the party’s official dance band which eventually turned into a carnival of praises to God Almighty. Deputy Governor of Delta State, Barr. Kingsley Otuaro said: “What we are seeing in Ika is simply unprecedented. It is just saying PDP come and take. It is five-over-five for PDP.”

On each occasion, the Delta PDP Director of campaigns, Rt. Hon. Funkekeme Solomon, while thanking the people for the massive turnout, evidence of their love for the party, he called on them to translate the turnout into votes for the PDP at the coming elections.

Rt. Hon. Solomon said: “We have not come to campaign here, but to thank you for giving us a son (Okowa) and our leader, and we are thankful for the good work he has done in Delta State.”

The Director of Campaigns highlighted two truths, which he said the people must consider in favour of voting for all the PDP candidates, beginning with the Atiku Presidential candidacy. He said: “The first truth is that the  PDP built this country from 1999 to 2015. The second truth is that APC destroyed this country from 2015 to 2023. And because they have destroyed this country, PDP is here to rebuild the country. And today, His Excellency (Governor Okowa) is being promoted to the Vice-Presidency of this country. And he will be handing over to Rt. Hon. Sheriff Oborevwori.

“And so we appeal to you to vote for Atiku Abubakar Presidency, where our leader will be the Vice-President, vote for the National Assembly candidates, from Ned Nwoko and all other candidates of PDP, including our leader and Governorship candidate, Rt. Hon. Sheriff Oborevwori.”

Solomon urged the people to see the voting event as a competition as at the end of it all results will be declared pointing out the Local Government that did best in voting for PDP.

Meanwhile, no fewer than nine persons dumped their parties to join the PDP, one person from Ika South and eight from Ika North-East. The decampee from Ika South, and leader of the “Together we go group” in APC Mr. Simon, said the group has decided to join PDP because we have seen that the PDP has presented the most formidable and experienced candidates.

The eight persons who dumped their parties and their House of Assembly candidacies include:

Pointing out that it’s an elevation to a position of nobility and responsibility, he thanked the people for their support over the years, with a call on them and all Deltans to join in commending the party for the choice by voting massively for all its candidates in the forthcoming general elections as they had always done.

Okowa, while pointing out that since the old Bendel State, nobody from Delta State has emerged as Vice-President, he said it was therefore necessary that “We are thankful and asking for your support because I know that you will back me and my party to achieve the task of recovering Nigeria.

The Vice-Presidential candidate said: “By the special grace of God, you have always supported me throughout my political career and I have seen Ika people come out in great numbers in the past, but I have never seen this kind of crowd in our campaigns here.

“I want to use this opportunity to thank the leadership of the PDP and our Presidential Candidate, Alhaji Atiku Abubakar, for finding me worthy to be the Vice-Presidential candidate of our great party.

“I have challenged our people in Delta State that as a State we must cross the one million votes mark and as people of Ika nation, I challenge us to deliver a minimum of 180,000 votes for the party.

“I urge you all to justify my selection by ensuring that all our votes in Ika nation will go to the PDP and God will bless you as you continue to work hard for us to deliver in all the elections.”

Governor Okowa said that the choice of Sheriff Oborevwori as Governorship candidate was divine, and urged the Ika people and Deltans to support him. Oborevwori, while speaking commended the people of Ika for their massive support, and assured them that his administration’s MORE Agenda would develop all parts of the State equitably.

State PDP Chairman, Olorogun Kingsley Esiso, said Ika people were fortunate to have produced a Governor and now the Vice-Presidential candidate of the party and urged them to vote 100 percent for the PDP to justify the party’s choice of Okowa as Atiku Abubakar’s running mate. He introduced the PDP candidates and handed them party flags to fly at the elections.

Party leaders in Ika South and Ika North East Local Governments who spoke assured the campaign train of massive votes for all the PDP candidates, noting that the party had always won elections in the Local Government Areas.

Among numerous leaders at the rallies were the wife of the Governor, Dame Edith Okowa; Deputy Governorship Candidate, Chief Monday Onyeme.