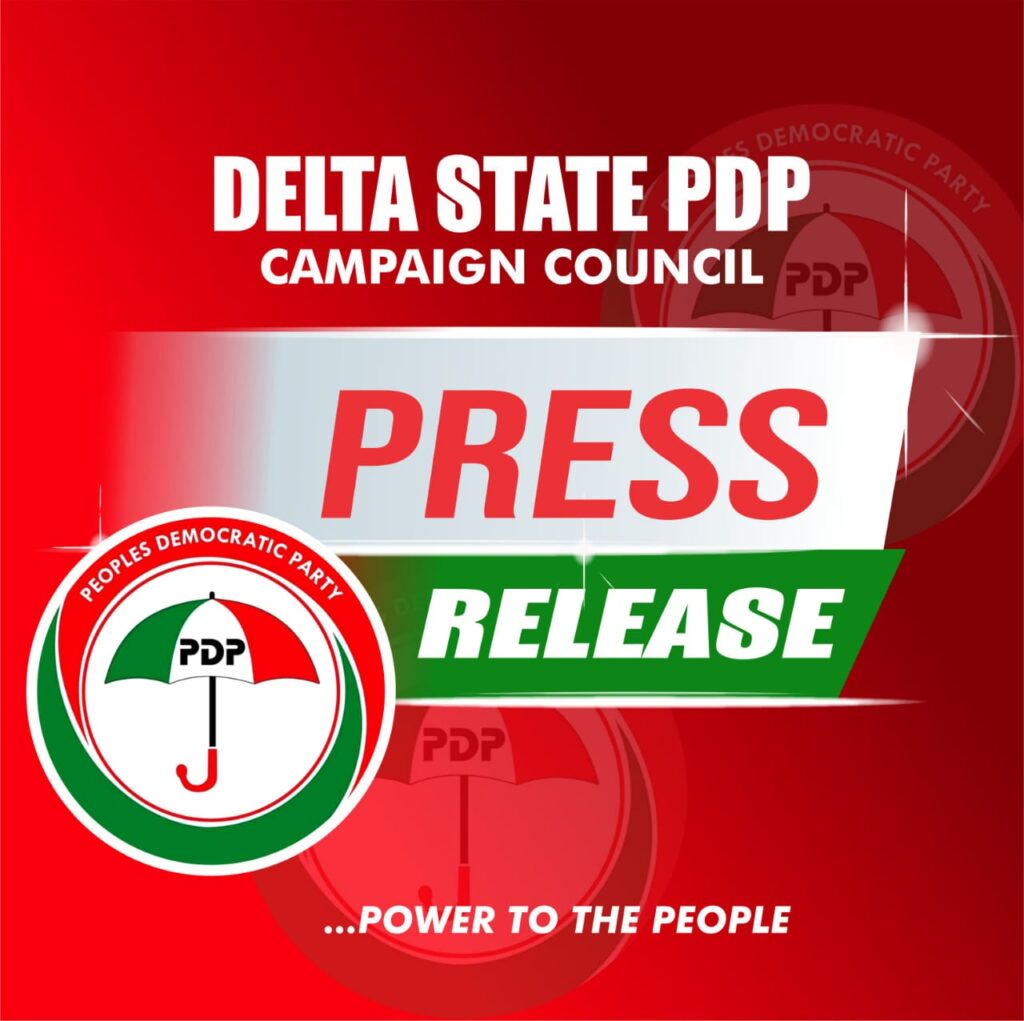 The Campaign Council of Peoples Democratic Party, PDP in Delta has chided on Basil Okoh over what it called a failed attempt to undermine the rich pedigree of its Governorship candidate, Rt. Hon. Sheriff Oborevwori.

The Council in a statement with the title: “Basil Okoh: A Sounding Cymbal That Signifies Nothing” said:

“The attention of the Peoples Democratic Party (PDP) Campaign Council in Delta State has been called to the failed attempt by an off-price specialist, one Basil Okoh who tried to undermine the rich pedigree of the high flying Governorship candidate of the PDP and Speaker of Delta State House of Assembly, Rt. Hon. Sheriff Oborevwori.

Delta PDP’s Publicity Secretary, and Deputy Director, Media/Publicity of the Campaign Council, Dr. Ifeanyi Osuoza, while describing Okoh as a political jobber and hack writer said the political never do well had in his usual fit of bad temper tried disastrously to compare the Rt. Hon. Sheriff Oborevwori, the toast of Deltans with his (Okoh’s) paymaster, Senator Ovie Omo-Agege, the All Progressives Congress (APC) Governorship candidate, who is currently assailed by a barrage of integrity questions.

The PDP spokesman said Okoh in a mediocre and unimaginative write-up: “OVIE VERSUS SHERRIFF: CHARACTER AND COMPETENCE SHOULD RULE DELTA STATE” exposed himself as a horse for hire because his article when viewed critically was actually a fitting critique of the person of Ovie Omo-Agege. The article which aims to excoriate Sheriff Oborevwori indeed threw up arguments that points to the fact that this political jobber has never been engaged in real-life experiences to put him up as one that should be taken seriously. For instance, Basil Okoh wrote: “It is in the sense of that profound presence of the past that Sheriff comes short as his yesterday does not recommend him for responsibility or political acceptance. If the past offers a guide to the present, then Delta State voters should be running scared of Sherriff’s past life before his foray into politics.

“The contrast with Omo-Agege is so stark and distinctive that it would appear that the two men came from two different worlds and two conflicting epochs. While Sherriff cannot make any claims to admirable progeny or breeding that could have prepared him for office or leadership responsibility compared to Obarisi Ovie Omo-Agege…”

With this clear understanding of the intellectual and real-life experience limitations of Basil Okoh, it has become crucial to expose this simpleton by referring him to write-ups in the public domain about the steady upbringing of Sheriff Oborevwori. In an article with the headline: “Delta 2023 and the case for Oborevwori,” Dr. Festus Okubor wrote: “All through the ages, great leaders who impacted their generations and times rose from among the people and suffered as they emerged from nothingness to become something. The examples of Winston Churchill of Great Britain, Abraham Lincoln of America, Nnamdi Azikiwe of Nigeria, Kwame Nkrumah of Ghana, Obafemi Awolowo of Nigeria, just to mention a few reminds us that life for great leaders was never a walk in a beautiful park. A more recent and contemporary example has been Barack Obama. These leaders have certain things in common. One of which is found in their humble background and beginning.”

It was as if Dr. Okubor knew that hack writers like Basil Okoh would one day come up with such infantile and shallow reasoning just to excoriate Oborevwori, so he came out with the above article with which he completely exposed Basil Okoh’s display of little intellectual value. Okubor also said: “Sheriff as Oborevwori is widely and fondly called, came from a humble background and worked hard at odd and menial jobs to make ends meet. He never allowed his background to become a deterrent in his sojourn in life. He started from the very beginning with no helper except God. Like every child of his time and place, Sheriff went to Primary and Secondary Schools and earned a pride of place among his peers. He knew the streets, became street wise, and enjoyed massive street credibility. He soon became the champion of boys and a symbol of their defence.

“Despite his underprivileged condition and becoming the champion of the downtrodden, Sheriff was never in defiance of the status quo. What he did was to get education and join politics and begin his advocacy for a better life for the common people who populate the streets. This stance earned him post after post in the executive arm of Government and the ordinary people on the street who constitute the bulk of humanity saw his genuineness and acclaimed him as truly one of their own. They saw him as the advocate for the youths and the masses. These same people came together in 2014 with a message that Sheriff should run for the Okpe House of Assembly seat and have a chance to truly and fully represent them in the legislative arm. He listened to their call and his victory at the polls in 2015 was overwhelming and unprecedented. That was the beginning of the mystique or icon called Sheriff that has today become an idea known as Sheriffication,” Dr. Festus Okubor testified.

But how do members of the observing public perceive Ovie Omo-Agege, who Basil Okoh for lack of intellect is trying to whitewash? At this stage it’s important to also call attention to the write-up by one Ejiro Idama sometime ago on Omo-Agege. In the article published widely with the headline, “Ovie Omo-Agege, in case you have forgotten,” Idama said: “The lackey Deputy Senate President of the rubber stamp and most docile Senate ever in Nigeria, Senator Augustine Ovie Omo-Agege is in the news again as always for the wrong reason. A good example of political prostitution, Augustine Omo-Agege, he must be frightened of the name Augustine now, has suffered from an illusion of becoming Governor of Delta State for seventeen years.

“Omo-Agege who lived an obscure life in the United States of America (USA) after having been severely indicted for unethical practices, fled to Nigeria and not capable of court appearances joined the Peoples Democratic Party (PDP) hoping to climb on the back of his Chief Judge father. Without a naira to his name, Ovie Omo-Agege survived at the mercy of friends. He failed woefully when he tried to run for the House of Representatives seat. The kindhearted Governor of Delta State at that time, Chief James Ibori took pity on him and appointed him as a Personal Assistant. With deceit, blackmail and eye-service and some say juju, Omo-Agege worked his way to become a Commissioner and fixed himself into the State Tenders Board where he committed havocs tampering with projects whose amounts ran into billions of naira and which could have turned Delta State into an Eldorado. Agege got so power drunk when he became Secretary to State Government (SSG) that he thought of himself as the most powerful person in the State.

“In his intoxication by power, he stepped out to contest for the Governorship of the State and failed woefully. He then became a serial election loser. Apart from the 2006 primaries that he lost, he failed in two Governorship elections in 2011. He failed in his attempt to become Senator in 2013. He failed in his attempt to become Governor in the 2014 primaries. He failed trying to be a Senator in 2015 until the court smuggled him into the Red Chambers. Agege has also been caught up in serial political prostitution. He was in PDP, then AC, he was in RPN, joined ACN, returned to PDP, ran to Labour Party, and later jumped into APC. His record of political prostitution is second to none in Nigeria.”

Idama further said about Omo-Agege: “Agege is showing off as a political force, but this is absolutely untrue. He is just a political straw man pretending to be a champion. He has always ridden to power and influence on the back of benefactors like Chief James Ibori and Chief Great Ogboru, good and selfless leaders that he later betrayed and brutally stabbed in the back. Agege is also a slimy opportunist who will do anything including groveling and crying to get power. The story of the mace theft and the resultant reward for him as Deputy Senate President and how he knelt down in slavish gratitude to President Buhari continued to hunt the Urhobo people for whom it is a taboo for a Chief which he is to kneel.

“Agege’s public service record is burdened by criminality. How he looted funds and turned his house into a CBN from where his cooks and housekeepers made away with bags of money is well known to Deltans. He also extorted contractors handling different projects across the State. He collected money for forty-eight projects in his Orogun clan which he didn’t execute. Let him tell Deltans how much he was worth between 2003 and 2005 and then how much he was worth in 2007.

“But for the fact that we live in a society of forgive and forget, Agege’s record of betrayal is unmatched. He betrayed the Urhobo people when he snatched ballot boxes to undermine the Urhobo choice of Governorship candidate in the 2007 election. He was chased into the swamp where he took cover all night. He betrayed his foremost benefactor, Chief James Ibori. He betrayed Chief Otega Emerhor and Chief Great Ogboru. He has betrayed everybody that he was or is associated with.

“Agege has also betrayed the Delta State ideal of rotational Governorship which was adopted to promote fairness, equity, peace, and stability. His uncontrolled aggression and inordinate ambition made him to disown the rotational principle in Delta State politics. He contested when it was the turn of Delta South. He also contested when it was the turn of Delta North. He is a betrayal of public trust and accord. He also manipulated the APC Governorship primaries in 2019 to the extent that results were declared when contestants were still looking for the venue of the election. Is this man who is the symbol of lack of moral probity the one pretending to rescue Delta State?

There are also the many lies he has told Nigerians and Deltans. He lied that he saved President Buhari from impeachment when in truth there was no attempt to impeach the President. He lied about being in support of power shift when in truth he was the Chief Campaigner for Senator Ahmed Lawan for President hoping he would be his running mate. He lied about midwifing the electoral bill, but the truth was that he voted against electronic voting. He has also failed to complete the constitution amendment assignment. Is this the man that wants to be Governor?”

It is hoped that from the public perception observatory by those who know Omo-Agege that Basil Okoh, the quintessential hack writer, and his quest for stomach infrastructure would have learned some lessons about his oga.

Yet for us in the Delta PDP and the Campaign Council, Basil Okoh’s tirade is uncharitable and a non-event. That is why it is dismissed for what it is, “a sounding brass and a tinkling cymbal” that signifies nothing.