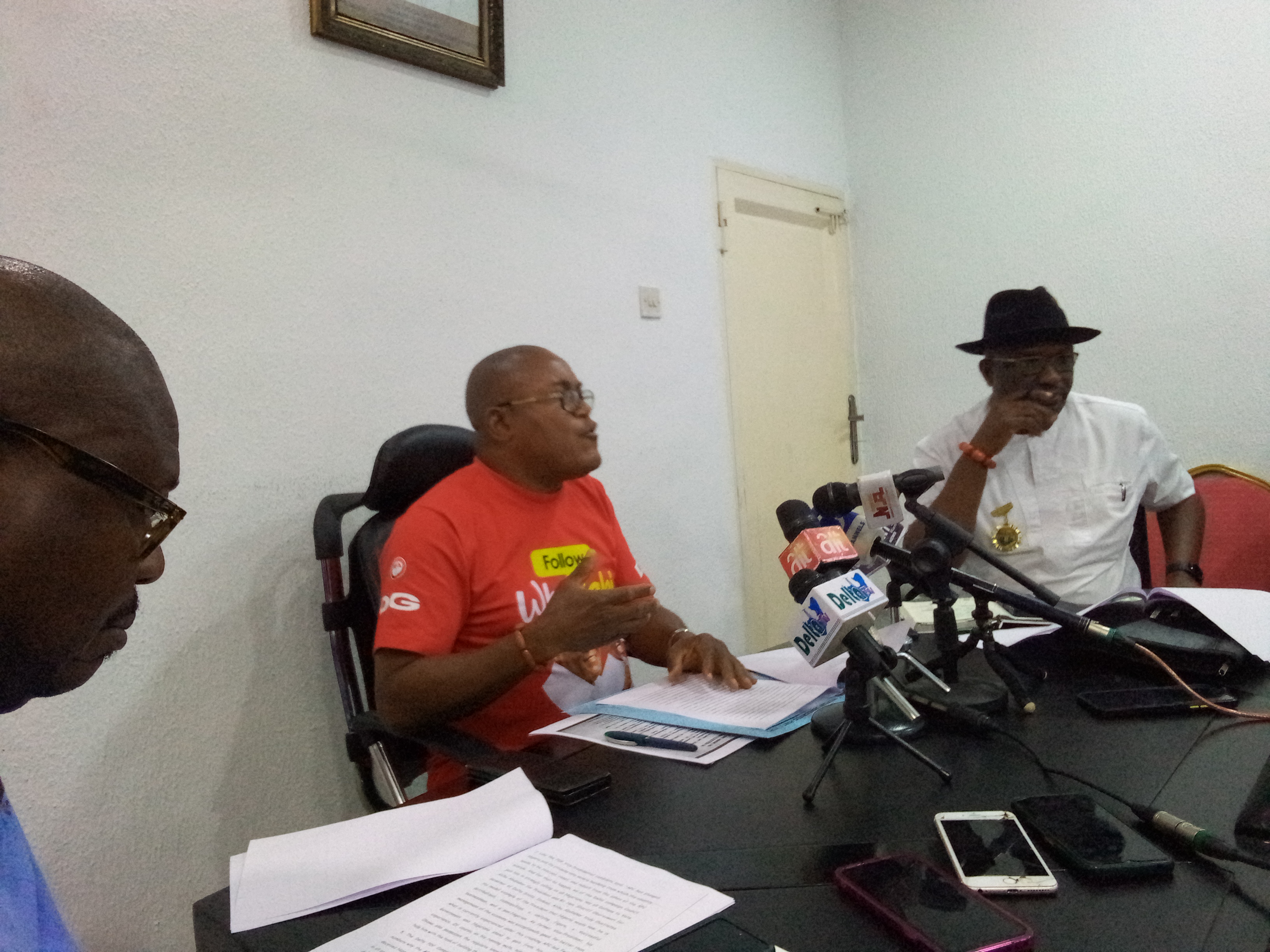 INTERVIEW – No party can threaten PDP in Delta, says Funkekeme Solomon; hints that Ibori was on national assignment during Ethiope East rally

The Campaign Council of Peoples Democratic Party (PDP) in Delta on Wednesday, January 18, 2023 held a press conference addressed by the Director of Campaigns, Rt. Hon. Funkekeme Solomon. With him were the Deputy Director, Media and Publicity, Dr. Ifeanyi Osuoza, the Chairman, Media and Publicity Committee,, Chief Emmanuel Amgbaduba and Olorogun (Barr) Fred Latimore, member of the Media and Publicity Committee. The Director of Campaigns fielded questions from the journalists during question time. Find below excerpts from the Question and Answer session as recorded by banneronlinenews.com.

On alleged “mass exodus” of PDP members to other parties, and what has the reconciliation effort of the reconciliation committee of the party achieved so far? It was noticed also that Chief James Ibori the former governor snubbed and boycotted the rally in Ethiope East Local Government?

You know you like to use words your own words. You are imputing motive. What is mass exodus? There’s no such thing called mass exodus in PDP. People are free to seek solace wherever they want to seek solace. So, the reconciliation effort of the PDP is working, and going on steadily. At no time could you have a situation where everybody would be satisfied. So what is important is that majority are satisfied. And that is why you can see that there’s stability in the party.

If you had witnessed our campaigns, you would have known that it is difficult for any other party gather such crowd. So, there’s no such distraction like mass exodus. If you speak of a pocket of persons who for personal reasons like conflict with the leader, not with the party. PDP is intact and the reconciliation movement is intact. In fact, we are going from strength to strength. As for what you said about our leader, Chief James Onanefe Ibori; Chief Ibori is the leader and also the leader of Okowa. So, he is the leader of all of us. He was unavoidably absent because he was busy with national assignments. Nobody sent any delegation to him and he never snubbed anybody. There is nobody who will disrespect Ibori in Delta State because he is our leader; the leader of all of us.

On defections, you know that movement from one party to the other is normal in politics, especially at this time. They receive we receive. Just on Tuesday, over 1,000 from Ndokwa East, the entire EXCO of APC in the local government. This is the season of anomie; everybody moves from place to place. As far as we are concerned, PDP is doing well. There’s no Deltan that can deny the performance of Dr. Okowa for example. This past eight years in all facets of development. So we are not worried about anything. For instance, also in Udu LG, all the women in Udu market, resigned from APC and joined PDP. It is nothing to worry about. The people we are taking from APC are the people of substance.

On the unfulfilled manifesto of APC that you read?

(Cuts in) But he took all to his village.

What projects did Oborevwori as Speaker to his area?

Am I to tell you? That’s what you should find out. Remember that I was a former Deputy Speaker of the House of Assembly. First and foremost the Speaker has no power to approve anything on his own. The Speaker is just a primus inter pares, first among equals. He is just the presiding officer. And the Speaker cannot enter the arena; that means that the Speaker cannot influence anything on the floor of the House. He just presides. So, the issue that Rt. Hon. Oborevwori approving loan is misplaced and I am surprised that that kind od statement can come from a legislator. He knows that the Senate President has no power to do anything without the support of the members. So the issue of approving and not approving does not arise. If the Speaker approves and did not take it to his village that makes him a statesman than the gluttony of somebody who wants to appropriate everything to a particular location.

About pressure from people contesting from Delta Central affecting PDP’s at the elections.

Let me tell you that people from Delta Central have always contested. They are always contesting. Ogboru has been constant; Gbagi has always contested. The 2/3 of 25 you are talking about – Delta North has nine local governments; Delta south has eight local governments. Eight plus nine is already more than 2/3. So don’t be afraid, it is not a problem. 2019 was the first time that PDP won in Delta Central comfortable. All along we didn’t do that, we don’t win in Udu, we don’t win in Ughelli north, we don’t win in Ethiope East. So it has come to a point now where our candidate is a strong candidate and he is coming from an axis that has never produced the governor – the Okpe. So I don’t see an Okpe person that will not think twice, unless a witch and wizard that will not think that axis has been bestowed by God to produce the Governor will not work for it.

We have strong people in all the local governments. And politics is contest. We will do our own, they will do their own. So, I am not going to tell you the strategy we are using, that will not be right.

Please clear the allegation by Labour Party that their bill boards have been destroyed by members of your party. If this is true does it not a sign that PDP is threatened the Labour Party’s popularity?

First, it is not true that any bill board was destroyed. Second, PDP is too entrenched in Delta State to be threatened by any political party. If you notice, every other person who is somebody and is abusing people, they are offsprings of PDP. There’s no new person. Is it Gbagi? Is it Omo-Agege? Is it Ken Pela? There are some unknown people. I don’t even know them. So, there’s no way that we can be threatened by an unknown  force. We are not threatened at all.

PDP is focused. PDP believes clearly that we have done well, and that nobody changes a winning team; and nobody wants a failed team. That’s the strategy; that’s the point and that’s why we’ve been able to develop this state to the point where every Deltan appreciates. And that’s why God has promoted us to the presidency, and by the grace of God, we shall be vice president of this country.