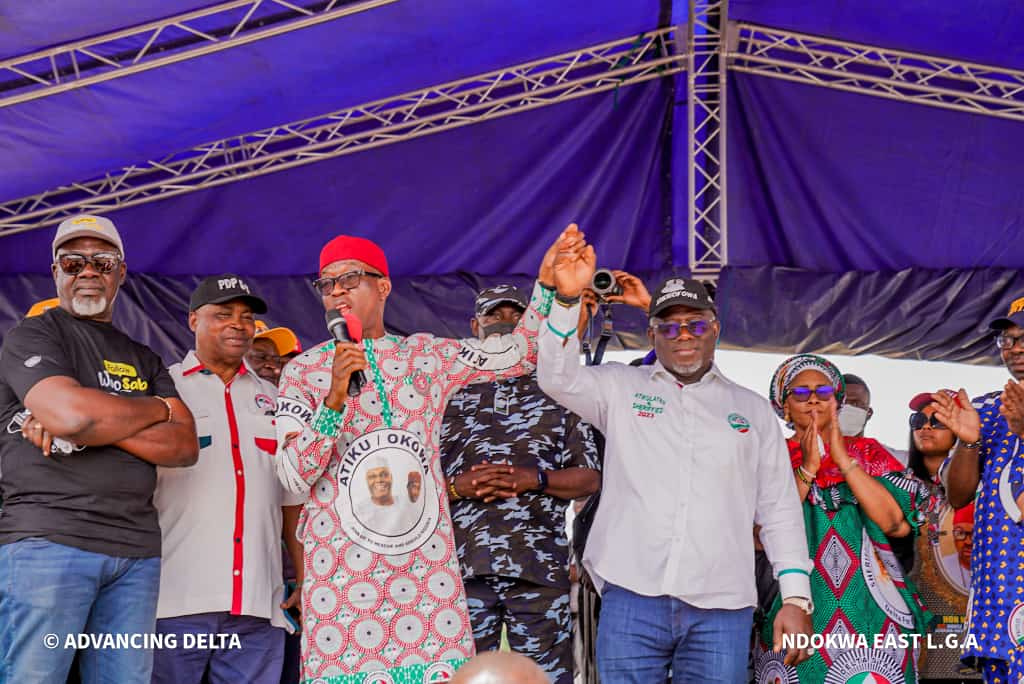 A recent post in the social media by one Basil Okoh against the Governorship candidate of the Peoples Democratic Party (PDP), and Speaker of the State House of Assembly and which drew its Media and Publicity office to do a response is for this writer a development that is unfortunate. Unfortunate because it would appear that Basil Okoh, obviously did not hide his contempt for the PDP’s Governorship Candidate and Speaker of the House of Assembly, Rt. Hon. Sheriff Oborevwori, who he attacked with delight.

It is not difficult for an observer to ask if Basil Okoh and Oborevwori were opponents in the PDP Primary contest, to warrant such vilification of Oborevwori, especially considering the virulence and the use of uncouth words employed by Okoh to seek to tear and bring Oborevwori down. Calling him a man with no visible pedigree who should have no right to aspire and become somebody in life, for me, is the height of insensitivity, prejudice, and narrow-mindedness.

Not done, Basil Okoh has again taken on the Media and Publicity office, attacking the spokesman, Dr. Ifeanyi Osuoza for having the guts to respond and expose his intellectual limitations, chiefly as one who did not know the political trajectory of Ovie Omo-Agege, whose cause he championed in the vexed write-up, while seeking to deride the personality of Oborevwori. It is not clear why Basil Okoh took offence with the PDP spokesman. If one may ask, did he expect that the lies and propaganda he tried to make about Oborevwori’s humble beginning should have been left to fly without a response that exposed him truly as a hack writer?

The PDP response to Basil Okoh actually dealt and debunked the claims and aspersions that Basil Okoh tried to cast on Oborevwori. Because, unknown to him, persons who are active players in the politics of Delta State like Dr. Festus Okubor and Ejiro Idama, both of who know Omo-Agege very well came out early enough in separate write-ups to deflate Omo-Agege’s claims to morality and altruism. It is the height of mischief and irresponsible lettering to call Dr. Okubor’s writing upholding Oborevwori’s exemplary history from grass to grace as “nonsense”. Basil Okoh’s statement here is gravely malicious because the detailing of the history of Oborevwori from his early life down below to the limelight and rendered in elegant prose by Okubor was a smart move by Osuoza to deflate and make a ruse of Basil Okoh’s propaganda. And he did because it exposed Basil Okoh as one who is carried away with trying to please his paymaster while at the same time uncovering his own little knowledge about the different worlds and conflicting epochs from which Oborevwori and Omo-Agege grew.

For me, Dr. Osuoza did exactly what was expected of him as the ears and eyes of his organization and their spokesman. He was smart in the use of content analysis to discredit Basil Okoh’s claims, and succeeded in projecting the high and exemplary efforts that have made Sheriff Oborevwori admirable, praiseworthy and classic. It was the moment of truth that Basil Okoh found difficult to acknowledge and accept.

Many like me are astounded as to why Governor Ifeanyi Okowa is always at the butt of Basil Okoh’s diatribe. So much so that attacking Okowa and his administration has become a disease, a scourge that seems incurable in Basil Okoh. Yet, the man Okowa is riding high despite Okoh’s demonstration of abhorrence. He reels out amounts, figments of his imagination, and warped thoughts of his paymasters. This, he deceptively weaves into a narrative as a true propagandist and hack writer would do to con the unwary into believing his falsehood.

Hear the brazen hack writer: “Since his nomination as the Governorship candidate of PDP in the State, the entire party hierarchy has been on the defensive, justifying the idiocy of a badly forged certificate, running rings around the truth even as the State Governor Ifeanyi Okowa has been throwing State money on a rotten case…”

Of course, it is Basil Okoh and those with whom he is in league, all of who band together as Okowa and Oborevwori traducers who are losing sleep over what the apex court in the land has long given its verdict. And Oborevwori has since moved on with campaigns across Delta State, selling his candidacy to the electorate and wooing them with his issue-based crusade. The whole thing has made Basil Okoh’s sponsors to be sore and sulking, to use his own words. They all live and daydream about the fall of Okowa and that Oborevwori will go nowhere. This is an illusion because as the politician would say, you de look am, e de go; you de look Okowa, e dey go; you de look Sheriff Oborevwori, e de go.

Again the hack writer, never short of distorted information, speaks about “a massive rush to the exit doors of the party” by those he called big wigs. I think the Director of PDP Campaigns, Rt. Hon. Funkekeme Solomon has since given a fitting answer at a recent interaction with journalists. Rt. Hon. Solomon said on defections: “You know movement from one party to the other is normal. They receive, we receive.” Just on Tuesday, (January 10th, 2023) over 1,000 from Ndokwa East, the entire EXCO of APC in the Local Government Area dumped the party and signed up for PDP. The Director of campaigns calls it “a season of anomie” in which people move freely from one place to the other. After all, people have the right to choose who to be in association with when an occasion suits them. In other words, people are free to seek solace wherever they find it. And in Delta PDP the majority of faithful members and supporters are satisfied.

Rt. Hon. Solomon spoke the clincher. “As far as we are concerned, PDP is doing well. There’s no Deltan that can deny the performance of Dr. Okowa, the Governor of Delta State in the past eight years in all facets of development. So, we are not worried about anything.”

Maybe Hack Writer Basil Okoh should be informed also that in Udu Local Government the women in the market resigned from APC and joined PDP. He should also be informed of the many that dumped APC for PDP in virtually all the Local Governments visited during the campaigns. So, that some people out of their own volition chose to leave in search of greener political pastures where they can find it is no big deal. In any case, has someone not said some time ago that it takes a fool to want to associate and canvas vote for the APC? The development speaks volumes about the rational disposition of such persons.

And the hack writer exposed his limited level of education when he delved into an area he is least qualified, talking about a tautology. While tautology speaks about the redundant repetition of a meaning in a sentence using different words, “sounding cymbal” are words describing a situation and so cannot be a tautology. Sounding cymbals talks about the sound effects of cymbals. Someone said that Basil Okoh attended the night school, the reason he should be forgiven for this intellectual inexactitude that he is always exhibiting. Incidentally, his paymasters are carried away and are pleased with such sloppiness. Better luck to them next time.

Last Line: I believe strongly that Dr. Ifeanyi Osuoza should restrain himself and his office from responding to fake narratives spurned by persons of less than no worth like Basil Okoh. To continue to respond to them is to inadvertently elevate them to pedestals of importance that they don’t deserve. He should not allow himself and his office to be distracted by the shenanigans of worthless attack dogs.