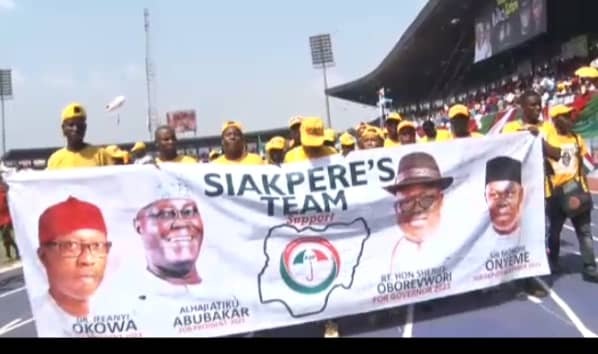 With the 2023 general elections fast approaching, a political pressure group under the People’s Democratic Party (PDP) the John Ewubare Siakpere Support Team for Sheriff Oborevwori 2023 has promised to carry out door-to- door campaign, galvanize support from the grassroots for the victory of Delta State PDP Governorship Candidate, Speaker of the State House of Assembly and National Deputy Chairman of the Conference of Speakers of State Legislatures of Nigeria, Rt Hon Sheriff Oborevwori and all other candidates of the party.

The group made the pledge on Tuesday during the PDP Presidential Campaign at the Stephen Kashi Stadium in Asaba, Oshimilli South Local Government Area of Delta State.

The founder and Director General of the group, Mr John Ewubare Siakpere, United Kingdom based lawyer, stated that PDP is the only reliable, competent and credible political party that can rescue and reset the Nigerian economy destroyed by the APC maladministration.

Siakpere who was represented by the Treasurer of the group Mr Cashman Oveghene noted that the political pressure group is already canvassing for votes to deliver the Atiku/Okowa and Sheriff/Onyeme presidential and governorship tickets and all other candidates to ensure landslide victories at the elections.

He said that former Vice President Atiku Abubakar was endowed with the best experience to rebuild the Nigerian state considering the transformative role he was saddled with in the administration of former President Olusegun Obansajo, adding that with the selection of Governor Ifeanyi Okowa as Vice Presidential Candidate, Nigeria would have better future.

He decried the high level of insecurity in the country, high cost of inflation and wide gap of the exchange rate between the Naira and the Dollar, noting that as at 2015 the Dollar was one hundred and eighty naira but today it has risen to over eight hundred and seventy Naira.

Speaking further at the Mother of all rallies where members of the Siakpere’s Team for Sheriff Oborevwori were so visible, Mr Oveghene called on Nigerians to vote out the APC government in the February Presidential election, adding that the return of PDP to power would guarantee a robust economy, peace and security.

He assured that the Siakpere’s Team Support for Sheriff Oborevwori would soon commence door-to-door campaign across the state with the aim of getting five-over-five victory for the PDP.

On the collection of permanent voter cards PVC’s, he urged eligible voters to ensure they collect their cards as that was the only way they could exercise their civic duties by voting for all PDP candidates.

Other members of the group who spoke included the leader Okpe Legislative Arm, Hon Aragbata Peter and Mrs Emomine Vivian, they re-emphasized massive mobilization by the group for the PDP to win 2023 general elections in order for Nigerians to breath fresh air again and live in a peaceful country.